There’s a pool offering rewards in tokens every 5 days for those who deposit their DVT tokens into it. Alice, Bob, Charlie and David have already deposited some DVT tokens, and have won their rewards! You don’t have any DVT tokens. But in the upcoming round, you must claim most rewards for yourself. Oh, by the way, rumours say a new pool has just landed on mainnet. Isn’t it offering DVT tokens in flash loans?

✅ If the value received as a function argument is less than or equal to the value of Liquidity Token, the condition can be passed.

✅ Borrower can pass if it is in the deployed contract state.

✅ The balance value of the liquidityToken contract must be greater than or equal to the previous Balance.

✅ The value received as a function argument must be unconditionally greater than 0 to pass.

✅ Call the transferFrom function of the liquidityToken contract to transfer the tokens held by msg.sender to the current contract as much as the argument of the parent function.

✅ Pass the value to msg.sender based on the transfer function of the liquidityToken contract.

Let’s analyze the reward logic in detail. First, snapshots and rewards are closely related. In a hypothetical scenario, we calculated the value that a user can receive after 5 days after depositing 10 ether. 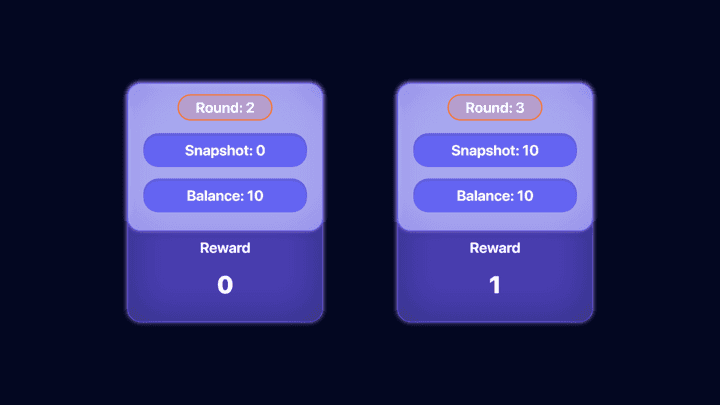 In the initial stage after depositing, you can see that the balance value is allocated to the pool. After 5 days have elapsed, in round 3, the conditions for receiving a reward are met, and the reward value is 1 ether, and 10 ether is recorded in the snapshot.

If the withdraw function is called in the Round: 3 situation, the Balance value of the Account Pool can be retrieved. As shown in the figure above, the Balance value becomes 0, but it can be seen that the Snapshot and Reward continue to maintain the value.

✅ Check whether the MINTER_ROLE value is allowed through the hasRole function and then check whether msg.senderis allowed.

If you analyze the implementation code, you can see that the ID value is issued in increments using the _currentSnapshotId Counter instance value, the transaction event is recorded, and the current ID value is returned through the _getCurrentSnapshotId() function. 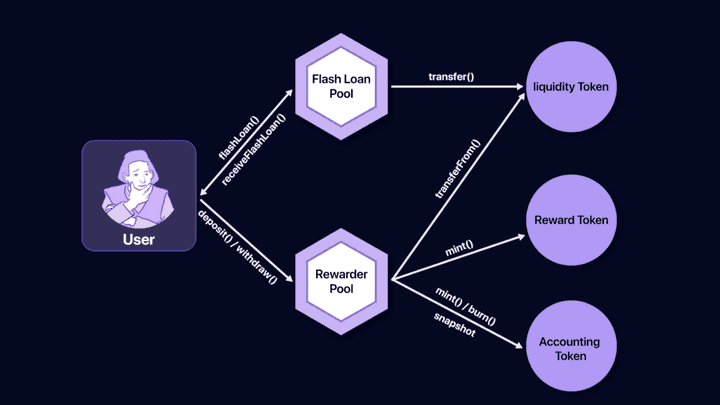 Since the contract is composed of each function, each function plays a certain role, and the main function determines the dependency to create a business flow and analyze it.

We identified the function of each contract based on audit. Since the Snapshot function is currently used in the reward issuance process, it was found that the Balance value and the reward value do not check each other during the actual withdrawal process. However, since it is a process after making an actual deposit, a line operation is required. Here, an attacker can obtain LiquidityToken by calling the FlashLoan function in the Flash Loan Pool, and then execute the Reward vulnerability logic to steal the balance.

The FlashLoan function inside the FlashLoanPool contract performs transfer and lends the user as much as the value in the pool, and then calls the receiveFlashLoan(uint) function, which has not been implemented yet, functionCall At this time, after importing the target contract deployed from the arbitrarily implemented contract, there is a vector that can implement the receiveFlashLoan function.

After borrowing the entire balance from flashLoanPool, the attacker deposits it in the reward pool to perform the reward logic. At this time, based on the reward snapshot management vulnerability, call withdraw from this pool to withdraw the balance and pay off the flashLoan loan.

If a reward is issued after arbitrarily manipulating a transaction for 5 days, as described above, the actual reward value is alive because of the snapshot function, so an attacker can steal it.